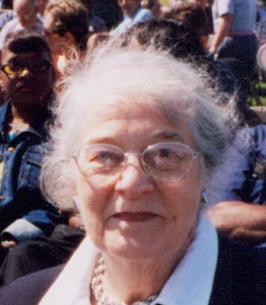 Harriet Julia Lawson, age 98, of Mantua Grove, West Deptford, New Jersey passed away Tuesday, June 15th at the United Methodist Communities at Pitman. Predeceased by her husband, George S. Lawson, she is survived by her son, Steven Lawson and daughter, Julie Lawson, and many loving nieces and nephews. She was also predeceased by her brother Charles T. Goess III.

Harriet was born in Philadelphia to Elizabeth Berwind Goess and Charles T. Goess Jr. The family moved to Audubon, NJ when Harriet was young girl. This pleased her as she loved the farms and woods that could still be found there at the time. Harriet graduated from Audubon High School in 1939, and won a scholarship to Glassboro State Teachers College, graduating in the Class of 1943. At that point, Harriet determined that she would prefer serving in the military to teaching and was accepted into the WAVE officer candidate school at Smith College that same year. She became an ensign in the Naval Reserve of the United States Navy and was promoted to lieutenant while serving in the Navy WAVES in Washington, DC during World War II. After serving but prior to her honorable discharge, Harriet attended Columbia University where she attained her MFA in English Literature in 1947.

Harriet married the boy next door in Mantua Grove, George S. Lawson, a decorated Army veteran, in September 1948. Over the years she was an active member of the Mantua Grove Chapel and then St. Pauls' United Methodist Church in Thorofare, where she was a member of the choir and Sunday School’s Anchor Class. She greatly enjoyed participating in bible study and many other Church activities, from covered dish suppers to Methodist Conference trips to fundraisers for mission activities. Two beloved fundraising institutions were the Christmas bazaar, where she could often be found working the book table, and the spring and fall Oyster Suppers, where in earlier years she helped with running the serving bowls and platters back and forth to tables of hungry oyster lovers.

Harriet was a volunteer for or member of various other organizations including the American Association of University Women, the Garden State Waves, West Deptford Senior Club and especially the local chapter of the National Alliance of Mental Illness (NAMI). She served as a board member for NAMI in which she was a strong advocate for improving the understanding of people with mental health conditions and enhancing their access to services and life opportunities.

Harriet was instrumental in establishing the West Deptford Public Library in 1965, with co-founders Francis Yanus and Connie Jabbs, and was Director there for many years. She saw it grow from a volunteer operation with donated books in the empty Thorofare #3 school building, to its establishment, in the former West Deptford Municipal Building, as a professional part of the state library system after obtaining her certificate in library science. She retired after working with the Library board and Township officials to see that the current purpose-built West Deptford Free Public Library building would be constructed.

After retirement, Harriet and George enjoyed many travels around the country and the world. Some of their favorite times were spent rambling around the American West and the Baja Peninsula in a camping conversion van, seeing the sights and sampling the local fare. One of her greatest joys was planning the next oversees adventure with family or friends. Even more, Harriet treasured holiday family dinners, from Memorial and Independence Day cookouts, to Christmas Eve and Christmas Day dinners shared with her brother’s family, to elaborate Thanksgiving, Christmas and Easter dinners with her nieces’ families in later years. Not surprisingly, Harriet was a voracious reader and avid worker of crossword puzzles (her favorites were from the NY Times), which she worked to keep her mind sharp- a strategy which proved successful until her final hours.

Family and Friends are invited to visit from 9:30 am to 11:00 am on Tuesday, June 22nd, 2021 at St. Paul's United Methodist Church 74 Church Street Thorofare, NJ 08086. Funeral Services will be held at 11:00 am, with Pastor David Delaney officiating. Burial with Navy honors will follow at Eglington Cemetery in Clarksboro, NJ.

Donations in lieu of flowers can be made to St. Paul’s United Methodist Church, Thorofare.
Memories and condolences can be shared at www.smithfhmantua.com