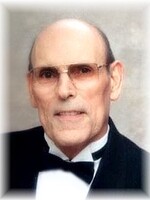 William M. Scaglione Sr., age 91, passed away on Sunday November 15, 2020 after a courageous battle with cancer. Bill grew up in New Jersey and Pennsylvania graduating from Overbrook High School in Philadelphia. After working a few years at RCA, he was called to serve his country in the Army in Korea during the Korean War. Upon returning, he went on to graduate from Drexel University and then started his career with the Federal Government working as a bank examiner with the FDIC until his retirement in 1989. He subsequently worked for the Department of Banking and Insurance in the State of New Jersey as an examiner until 1998. Bill was a sports fan, trivia buff, and loved working in his yard. He also loved watching classic movies and was passionate when debating politics.

Bill was predeceased by his first wife Lydia, his parents, Carmine and Lucy Scaglione, and his brother Angelo. He leaves behind his wife Bonita (Bonnie), his daughter and son-in-law Rene and Tony Mammoccio, his son and daughter-in-law William Jr. and Cara Scaglione, and his three grandchildren, Nina and Tony Mammoccio, and Aria Scaglione. Bill also leaves behind Bill Ciccarone, his best friend for over 75 years, his faithful dog Ollie, who laid by his side during his illness, and a host of cousins, nieces and nephews.

Family and Friends are invited to visit from 9:00 am to 10:30 am on Friday, November 20, 2020 at Smith Funeral Home, 47 Main Street, Mantua, NJ 08051. Mass of Christian Burial will be held at 11:00 am on Friday, at Church Of The Incarnation, 240 Main Street, Mantua, New Jersey 08051. Burial with Military Honors to follow at SS. Peter & Paul Cemetery in Springfield, Pennsylvania. As an expression of sympathy, contributions can be made to the Arbor Day Foundation at www.arborday.org

I condole with you. We have lost a dear and valuable relation. But it is the will of God and nature that these mortal bodies be laid aside when the soul is to enter real life. This is rather an embryo state, a preparation for living. A man is not completely born until he be dead. Why then should we grieve that a new child is born among the immortals, a new member added to their happy society?

We are spirits. That bodies should be lent to us while they can afford us pleasure, assist us in acquiring knowledge, or in doing good for our fellow creatures, is a kind and benevolent act of God. When they become unfit for these purposes and afford us pain, instead of an aid become an incumbrance, and answer none of the intentions of which they were given, it is equally kind and benevolent that a way be provided to get rid of them. Death is that way. We ourselves in some cases, prudently choose a partial death. A mangled, painful limb which cannot be restored we willingly cut off. He who plucks out a tooth, parts with it freely, since the pain goes with it, and he who quits the whole body, parts at once with all pains and possibilities of all pains and diseases which it was liable to or capable of making him suffer.

Our friend and we were invited abroad to a party of pleasure which is to last forever. His chair was ready first and he is gone before us. We could not conveniently start together, and why should you and I be grieved at this, since we are soon to follow and know where to find him.